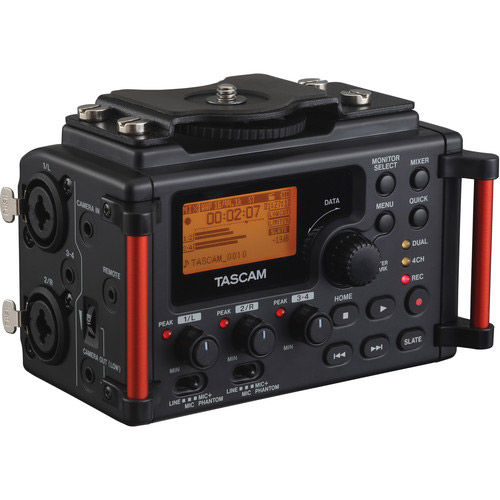 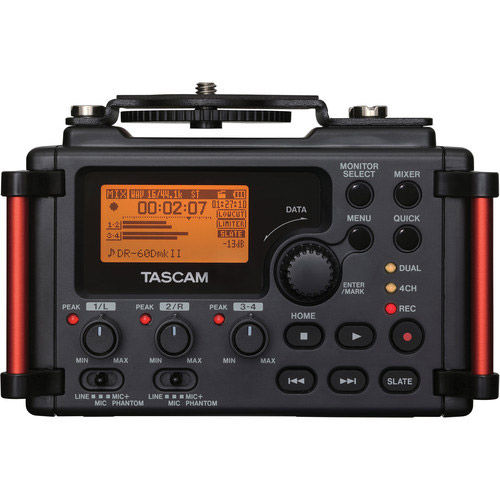 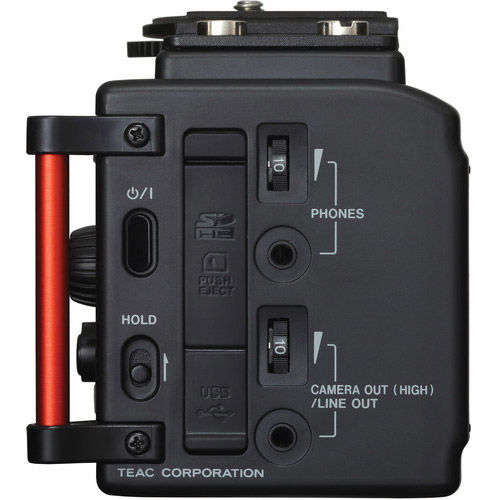 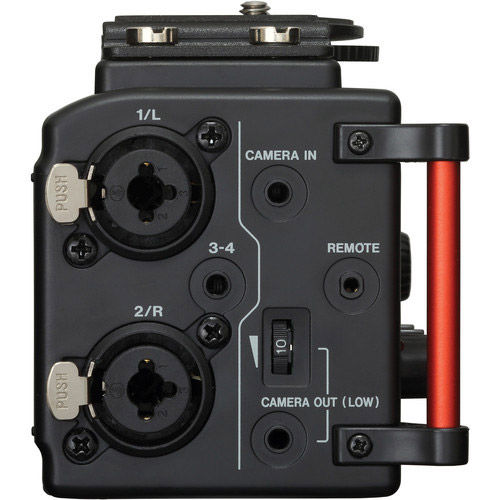 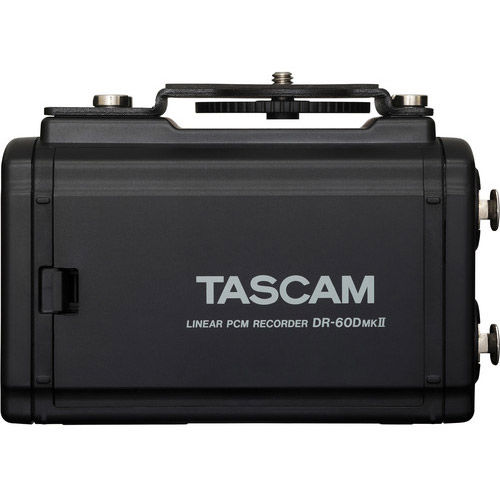 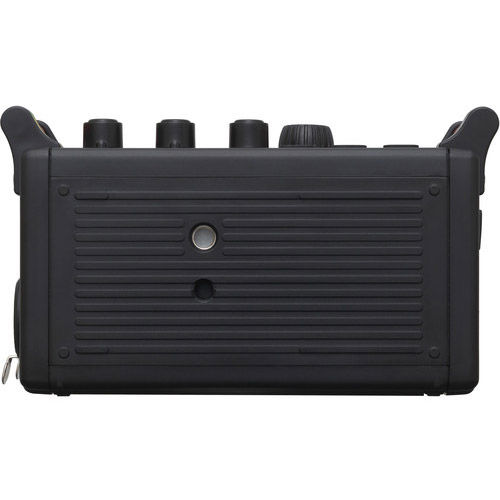 Add to Request
Available in Calgary

TASCAM's DR-60DmkII, an update of the award winning DR-60D, is the audio recording solution for on-set filmmakers and videographers. The streamlined design fits perfectly under a DSLR camera rig, without relying on bulky recorders or the limited audio quality of the camera’s microphone in.

The DR-60DmkII is the next generation of 4-track solid-state recording, based on TASCAM’s decades of recording innovation. The upgraded HDDA microphone preamps provide up to 64dB of gain, capturing every nuance of a performance. Up to four channels at a time can be recorded to the internal SD Card, at up to 96kHz/24-bit WAV file resolution. Two of the mic inputs utilize locking XLR connectors with 48V phantom power, the other two use an 1/8” stereo connector for wireless and lavaliere microphones.

A Camera Output sends the mic mix to the camera for later synchronization, and a Camera Input is provided for monitoring playback. An additional headphone out and line out assist the crew during filming. The DR-60DmkII is designed for low-noise operation, including soft touch buttons and dedicated gain controls.

Multiple recording modes are available on the DR-60DmkII. Four-Channel Mode records all four microphone inputs. Dual Recording is an alternate setting, capturing a copy of your audio at a lower level for a distortion-free safety track. Menus and operation are well laid out, owing to decades of innovative recording design.

Reach beyond the limited performance of your camera’s audio to capture the other half of your film. At a cost less than competing preamps, the TASCAM DR-60DmkII is the ultimate 4-track recorder designed for filmmakers, television, live events and web broadcast.

In addition, CIRRUS LOGIC's AD converter (made famous on the DR-40 linear PCM recorder) is installed to ensure high-lineality recording from any input signal.

The DR-60D can record up to 4-tracks simultaneously allowing for various mic set-ups. Inputs 1/L and 2/R can be selected for monaural operation or stereo link operation. There are 3 outputs at one's disposal. A CAMERA OUT for reference track recording to the camera, LINE OUT to run to a mixer, and a Headphone Out for direct monitoring. (In 4CH mode, 1/L and 2/R inputs cannot be selected for monaural operation.)

The DR-60D supplies mixing functionality to all 4 tracks. Adjust PAN, Level, Limiters, HPF (40/80/120Hz) and Delay easily from the user-friendly set-up. TASCAM is well known for having the easiest to use controls in the market. The DR-60D is ready to use right out of the box with its external, non-menu-intensive controls.

The DR-60D can be tailored further to one's recording needs with the various record modes. Choose between:

4CH mode:This mode is ideal for all-around movie shooting. For example, you can record two sources separately plus one stereo microphone all simultaneously.

DUAL MONO and DUAL STEREO mode automatically provide a back-up safety track in case the initial levels where set too high and clips/peaks were encountered. The safety track can be set to record from -6dB to -12dB lower than the initial take.

Every aspect of the DR-60D is designed specifically for DSLR Audio for Video Recording. The keys of the unit are designed specifically for quiet operation to eliminate handling noise. The Slate feature is designed to mark tracks easily while in production. The input and output layout is designed for versatile use. Whether the device is used under a camera, on a rig or strapped around a solitary sound engineer, TASCAM's DR-60D will meet all on-site audio production needs.

The CAMERA OUT connector outputs the sound mixed internally on the DR-60D. This output is equipped with an adjustable level control dial due to the lack of input level control on most DSLR's. This ensures a quality reference track is recorded onto your camera. Everything being recorded to the SD card can be sent to the camera - including slate tones - to make sync easier.

Automatic:OFF/HEAD(rec start)/HEAD+TAIL(rec start and end) (You can select duration of the slate tone: 0.5/1/2/3 sec)

The channels 3&4 input connector supports high-level maximum input up to +10dBV and have plug-in power available. Most video camera microphones are high-level output and equipped with a 3.5mm output connector.

The DR-60D's body was manufactured with very rigid plastic for a durable but lightweight design. TASCAM understands how important weight is to ensure one is getting the right shots and steady camera movement when filmmaking. In adiition to weight, the DR-60D is extremely compact while remaining feature-rich. Only 133mm (5.25") wide, the DR-60D will not interfere with any normal camera operation. Also, all batteries can be replaced without removing the device from the Camera or tripod / rig.

Features at a Glance