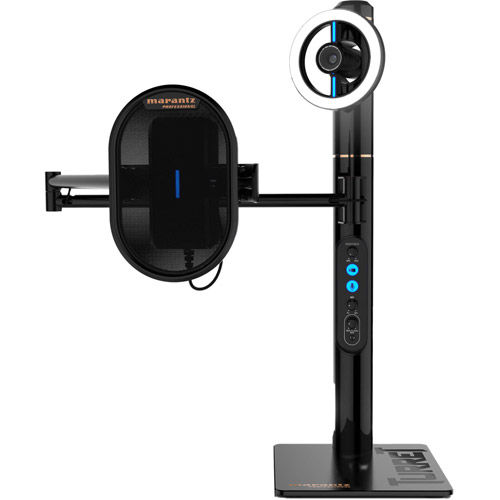 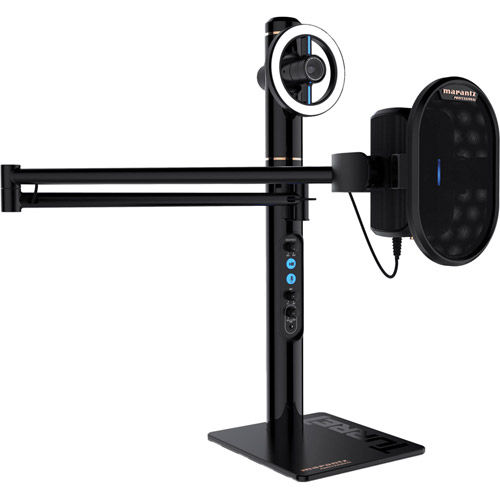 Add to Cart
Web Availability: Available for Order
No Reviews Q & A
Write your Review

The Turret delivers a unique, easy-to-use solution for users who need for a complete high-performance equipment system for streaming and podcasting. The Turret has a full HD webcam with built-in H.264 video compression, a high-quality 48kHz/16-bit USB condenser microphone with pop filter and an LED light ring, daylight-balanced, with both cool and warm filter accessories. 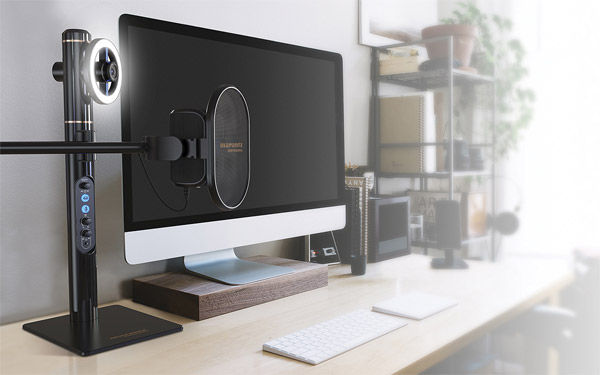 The Marantz Professional Turret is a unique, all-in-one broadcast tool that gives any podcaster, gamer or live internet streamer high-quality components with a multitude of configurations for creating a professional presentation. It’s compact and simple, perfect on a desktop and portable enough to take on location.

To make the system truly self-contained and capable of handling any streaming/podcast/gaming task without the need for additional equipment, Turret has a high-speed USB-C computer output for low latency and an internal USB hub. There is even an onboard headphone amplifier so audio monitoring is a snap. Everything the demanding streaming/broadcasting enthusiast needs is right here, in one convenient, high-performance package.

The camera is an auto-focus design, with Full HD 1080p video (up to 1920 x 1080 pixels) compatible with the latest version of Skype. It supports full HD video recording (up to 1920 x 1080 pixels). It has automatic low-light correction and is compatible with Windows® 7, Windows 8, Windows 10 or later as well as Mac OS 10.6 or later (HD 720p on FaceTime for Mac or other supported video-calling clients; Full HD 1080p video recording with QuickTime Player)

The microphone is also an extremely high performance unit. It’s a condenser design, with a 14mm diameter back electret condenser, sensitivity of -34dB ± 2dB (0dB = 1V/Pa @ 1kHz), max SPL of 132dB (THD: 0.5% 1kHz) and a wide-range frequency response of 150 - 15kHz. For the utmost in user convenience, the preamp is integrated with the microphone gain control on the tower. Users can directly monitor the microphone signal while recording/streaming, without the delay of monitoring through the computer’s headphone output. The headphone output – with level control - is located on the tower.

The Tower itself contains the main controls that the streamer/podcaster will access to use the system. There is an LED light dimmer, with click/off at extreme left position, headphone output jack, headphone volume, Mic gain knob, Mic mute button, and camera on/off switch. 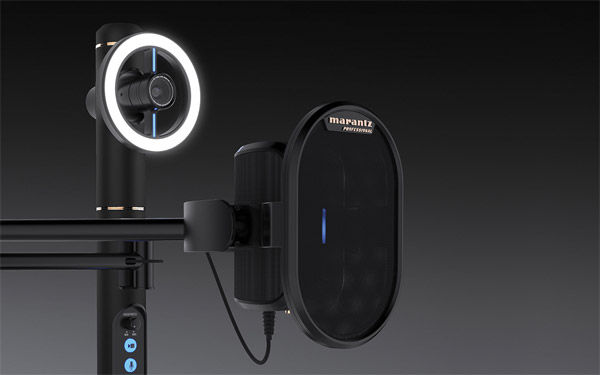 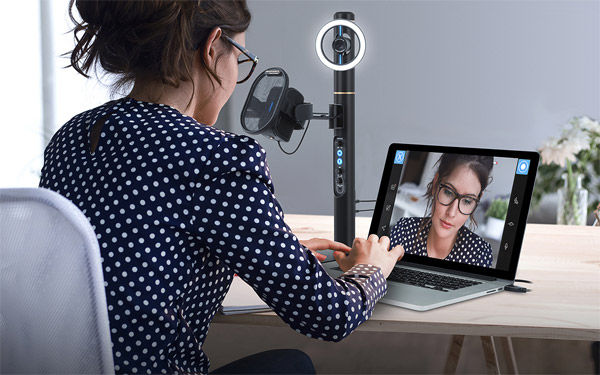 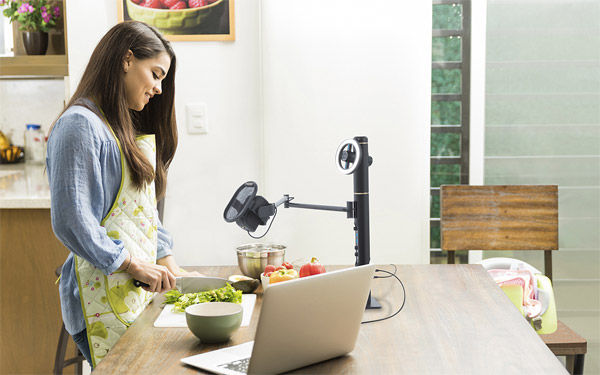 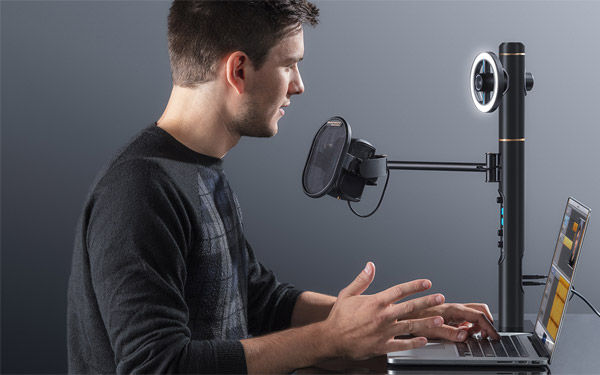 This kind of common-sense user-oriented layout and design makes the Turret both extremely easy and intuitive to use, while delivering extremely high, effortless performance. To the end user, the system is seamless and transparent.

An extremely high-quality headphone amplifier is a critical part of the Turret system. Without a pristine, articulate signal being sent to the headphones, the entire broadcasting/podcasting/gaming experience falls apart. The Turret hits the mark squarely here with a headphone amplifier of unimpeachable quality: THD <0.009%, Signal-to-Noise ratio >100dB and a frequency response of 20-20kHz. With an RMS power output of 130mW and an impedance of 30 ohms, the Turret headphone amplifier will drive virtually any headphone to extremely loud levels, with the utmost clarity and accuracy. 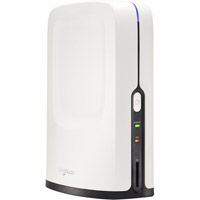 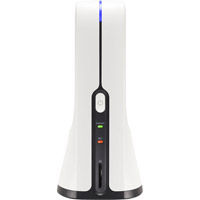 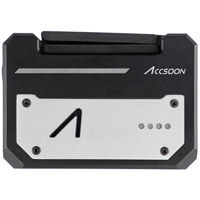 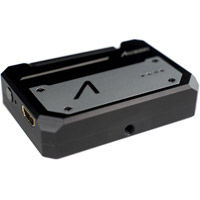 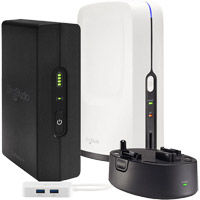 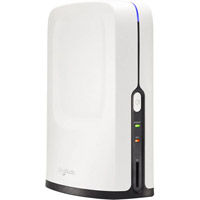 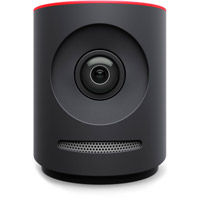 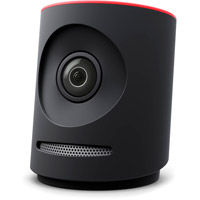 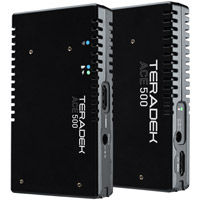 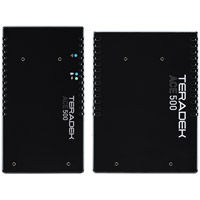 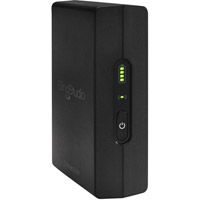 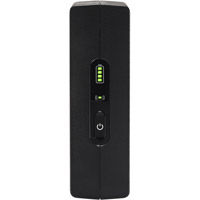 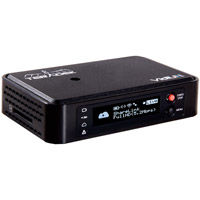 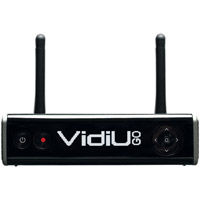 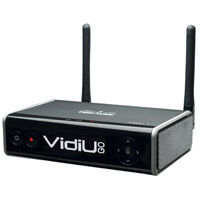