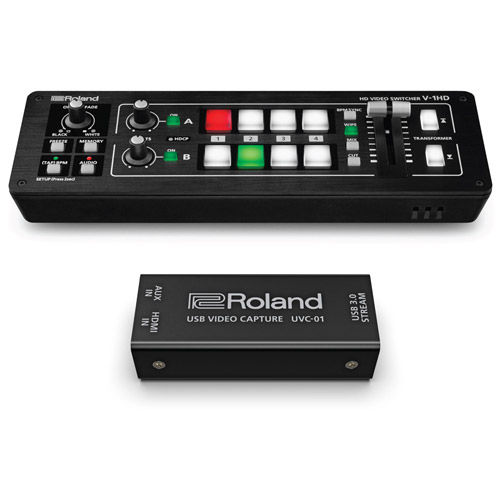 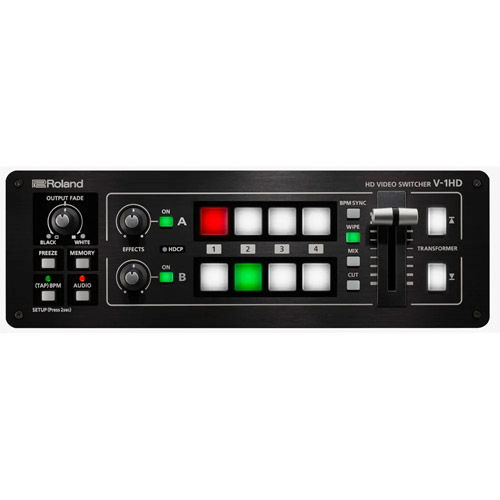 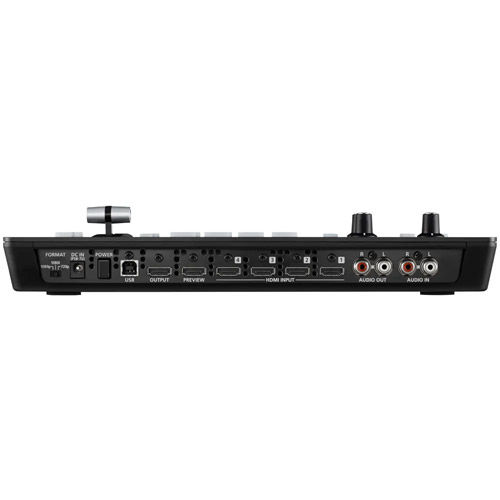 Roland V-1HD Streaming Bundle Kit wit...
$1,049.99 Add to Cart Add to Cart
Add to Wishlist
FREE SHIPPING Available
Web Availability: Special Order
This product will be Special Ordered just for you from the manufacturer. We do not stock this item due to its uniqueness or import schedule. Special Order items are Final Sale, see our Return Policy for details.
Vistek Locations Please call and verify availability at the store as stock changes daily.

So compact and portable, you can bring it and use it anywhere!

Ideal for supporting both live events and presentations

As well as small broadcast setups for enterprise video users, K-12 schools and house-of-worship environments. It is also an amazing creative tool for visual artists or musicians, who want to add video switching to their performances, create YouTube videos, mix content for online streaming and more. It is the most affordable 4-channel HD video switcher that includes a hardware interface, video FX and audio mixing/FX, making it a complete portable video switching and control solution. The companion PC/Mac or iPad application when connected by USB can also control the V-1HD.

Including cameras, computers, tablets, smartphones and even Blu-ray players, thanks to its HDCP copy protection support. Its high definition output can be switched between 720p (from 720p inputs), 1080i or 1080p. In either 1080i or 1080p output mode, the V-1HD can accept both 1080p and 1080i input signals simultaneously, allowing use with a range of sources. It has a 12-channel audio mixer for mixing stereo audio from HDMI and external stereo audio sources and its dedicated microphone input. The V-1HD includes two HDMI program and preview outputs and a stereo audio output.

An array of compositing effects

Including picture-in-picture and keying, allowing for graphic insets plus titling and green screen capabilities. The V-1HD is ideal for live event video switching, thanks to its advanced transition and filter effects – more than 30 effects and transition types including mix, cut, full additive mix (FAM), non-additive mix (NAM), wipe and other performance effects. The V-1HD also has output fade, BPM Sync and Auto-Scan functions. The A and B video busses each have controls for effects assignment and parameter control. The output can be switched A/B or in PGM/PST mode where the B buss is used for signal preview. The preview output can be set to a Multiview mode, where all inputs are displayed with colored borders indicating the program and preview selections, or in a full-screen mode. The preview output can be used for additional, menu-driven set-up control, or as a second output for applications such as a simultaneous webcast or recording output.

Easy to Operate with Hardware Controls 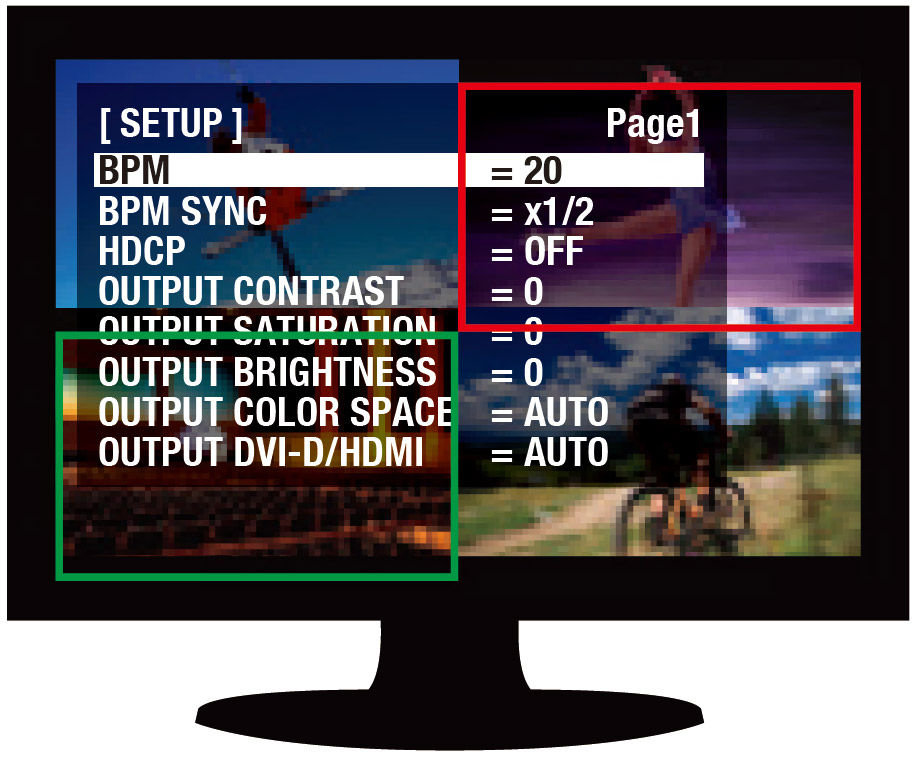 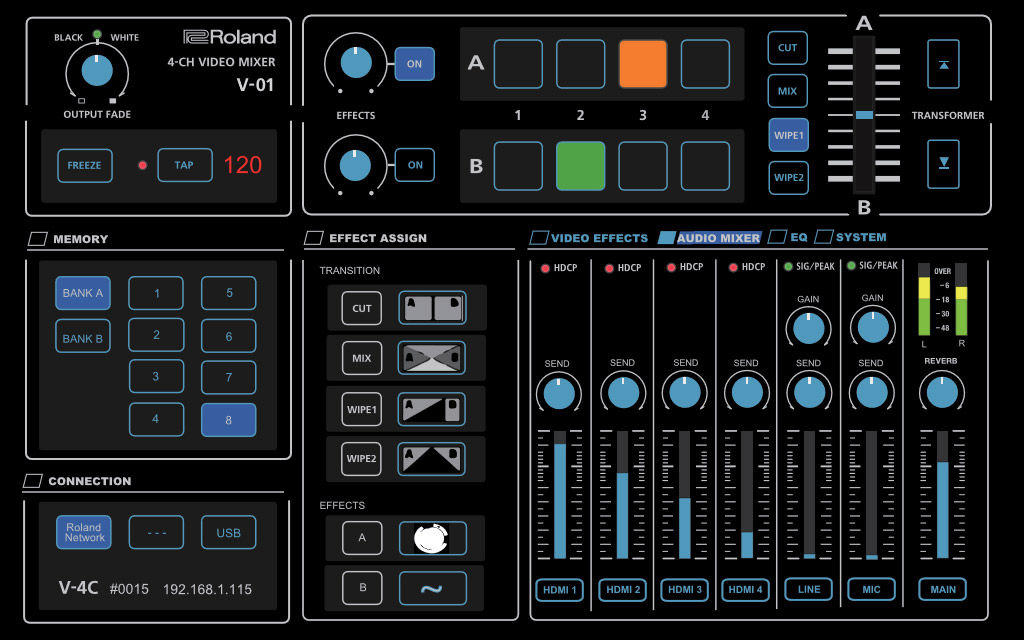 For online content creators, musicians, and gamers to businesses, schools, and houses of worship, livestreaming is an essential medium for communicating with people around the world. With the UVC-01, it’s never been easier to add high-quality livestreaming capabilities to your Roland V-series video switcher or favorite HDMI-equipped camera or camcorder.

Just connect to the UVC-01 via HDMI, plug into your computer’s USB 3.0 port, and start streaming to Facebook Live, YouTube, and other popular platforms. Offering plug-and-play operation in a rugged, pocket-size design, the UVC-01 is ready for action everywhere you go.

Quality You Can Count On

Backed by more than two decades of professional A/V product development, Roland’s UVC-01 drives your livestream with uncompressed 1080p HD image quality, ultra-smooth 60 FPS motion, and low-latency encoding. And thanks to its hardware-based design, it just works every time you need it—efficiently, consistently, and reliably.

Plug In and Stream

Once connected, the UVC-01 automatically shows up as a source in your streaming software, with no drivers or fussy setup required. Like a dedicated webcam, it encodes HDMI to USB video class and USB audio class formats, letting you instantly stream at superspeed USB 3.0 with any service, platform, or application that accepts a webcam as its A/V source.

With the UVC-01, stereo audio is embedded in the HDMI feed along with video. And thanks to the dedicated audio input, it’s possible to blend a secondary sound source as well. For example, you can play bumper music from your smartphone, or use Roland’s GO-MIXER Pro to combine a mic and instruments for impactful musical performances.

By delivering your message to in-person and online audiences at the same time, you can achieve a wider reach with minimal extra effort. Using a Roland professional video switcher in tandem with a UVC-01, it’s simple to create these hybrid productions. Just connect the UVC-01 to the second output of your switcher and simultaneously broadcast live action to your preferred streaming platform.

In some situations, you may want to record a presentation ahead of time and distribute it online after the fact. With the free Roland Live Recorder (Windows) and Video Capture for VR (Mac) applications, you can capture high-quality video and audio through the UVC-01 in real time, ready for upload to video sharing sites. 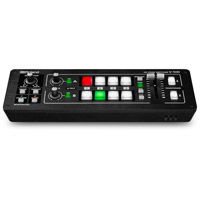 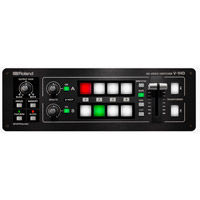 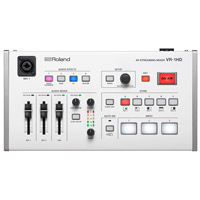 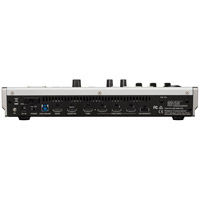 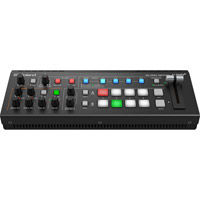 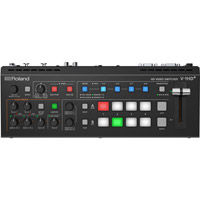 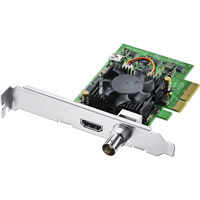 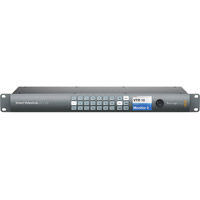 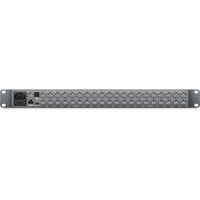 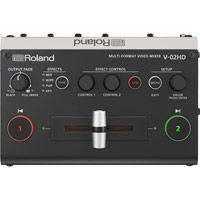 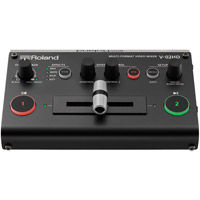 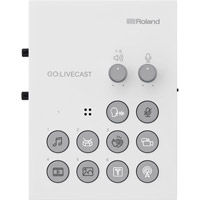 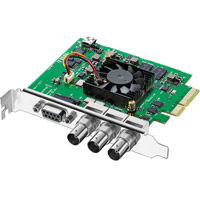